Given that chess was initially a royal game, among all chess categories, royal chess sets are the closest to the historical sets. Royal sets are classic chess sets that adhere to the royal traditions of the game. There are many options for purchasing a royal chess set today including the UK wooden royal chess set as well as handcrafted royal sets which are perfect for chess players who want something handcrafted and high quality. Royal sets reflect the rich history of chess and if you want to buy yourself one then you have to keep reading to discover the astonishing world of history and tradition of this royal game! 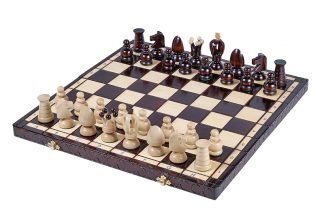 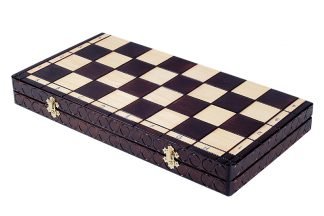 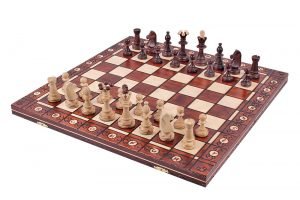 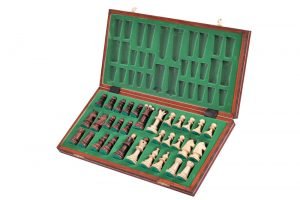 Rated 5.00 out of 5
(1) £84.00
Add to cart
History of Royal Chess Sets The usage of kings and queens in chess dates back to the oldest forms of the game, long before the 15th century when chess shaped into the game it is today. However, the use of the royal pieces—namely the king and queen— wasn’t a constant in the ever-changing history of the game. The roles and names of the pieces kept changing. For example, the queen piece was not one of the most important pieces in the game during the first few centuries of chess! The piece that stood in the queen’s stead was named ‘vezir’, which means ‘adviser’, and moved in a very limited manner and didn’t play a crucial role in the outcome of the match.  When the royal game traveled to Europe, in some cultures, it was forbidden to have a female character on the board. It was not until later that the queen piece was introduced, and given additional moves and directions, and eventually obtained a more critical piece in the game. Another notable historical fact and a key feature of the royal chess set is the presence of ornamental figures in place of standard faceless Staunton pieces. From the 15th century to the mid-19th century, it was not uncommon for royal pieces to be much more ornamental and detailed. Some pieces were even based on real-life kings and queens, ranging from Elizabeth I to Louis XVI and Marie Antoinette. These types of exquisitely made, detailed pieces definitely gave a new meaning to the phrase “royal chess set"!     To fully enjoy the royal game, you need a royal chess set. Browse Kaoori’s extensive collection of royal sets and experience the game on a different level.
close
Board Size
17
18.8
Board Type
Folding Board2
Set Colour
Notation
With Notation2
Pieces Colour
Pieces Set Type
Standard Set (32 Pieces)2
Pieces Storage
With Storage2
Weighted Pieces
No1
Yes1
Pieces Material
Price Range
Price: £75 — £84
Board Square Size
1.85
King Height
3
3.54
King Base
1.25
1.29
Set your categories menu in Theme Settings -> Header -> Menu -> Mobile menu (categories)